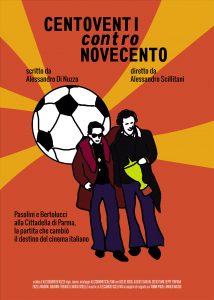 In the words of Centoventi contro Novecento’s director Alessandro Scillitani: ‘March 1975. On a spring morning, on the football field of the Cittadella di Parma, there was a very unusual match, in which the troupe of Pier Paolo Pasolini’s Salò, or the 120 Days of Sodom played against the troupe of Bernardo Bertolucci’s 1900. These two movies, which went on to leave a deep mark on Italian cinema, were being shot at the same time, their sets a few kilometers apart.’ The docufilm’s writer Alessandro di Nuzzo adds: ‘Carefully reconstructing the events of that Sunday and the piecing together the still vivid recollections of many who were there, the film touches upon various themes: the atmosphere on the sets of those two memorable Italian movies, the relationship between Pasolini and his ex-pupil Bertolucci, and the latter’s bond with Parma and its rural community. The common thread running throughout the film is the connection between Pasolini and soccer – an inexhaustible passion of his, which he practiced almost obsessively, and which he saw as an expression of pure vitality, perhaps even of a possible happiness.’