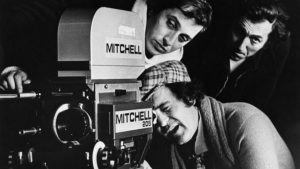 The festival “Mangiacinema. Festa del cibo d’autore e del cinema goloso”, is a must for anybody who is both a gourmet and a cinema buff. Its sixth edition, which will take place in Salsomaggiore Terme from September 25th to October 2nd, is entirely dedicated to Bernardo Bertolucci.

As the festival’s artistic director Gianluigi Negri says: “Bertolucci’s most popular movies were partly shot in Salsomaggiore. The first eight and a half minutes of 1900’s second act, which so beautifully illustrate the peasant world of the Bassa (“the low plain”), were shot at Terme Berzieri, the magnificent Art-Nouveau spa building that also hosts the festival. The five-minute dance scene in Bertolucci’s most celebrated film, The Last Emperor, was shot in the Salone Moresco of the Palazzo dei Congressi, another jewel of Salsomaggiore’s architecture. The cinematography for both of Bertolucci’s epic productions was done by Vittorio Storaro, the three-time Academy Award winner (the third time for The Last Emperor) who has been Salsomaggiore’s honorary citizen since 2011.”