In 1974 Action!, the magazine of the Directors Guild of America, invited Bernardo Bertolucci and Robert Aldrich to talk to each other about cinema and censorship. 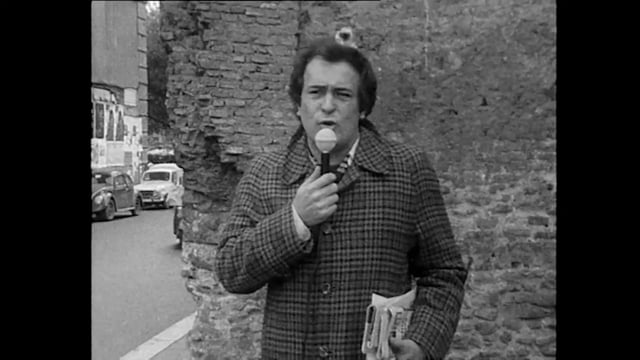 About Censorship: A Conversation

Recently ACTION brought together two directors of disparate backgrounds: Robert Aldrich, who came up from the Hollywood studio ranks, rising from assistant director to director of such film as Vera Cruz, The Big Knife, Whatever Happened to Baby Jane?, Flight of the Phoenix, The Dirty Dozen, The Killing of Sister George; and Bernardo Bertolucci, born in Parma the son of a poet, a film maker whose fifth movie, The Conformist, established him as one of Europe’s important young directors. Bertolucci achieved international fame — and notoriety — with Last Tango in Paris, for which he was tried on obscenity charges in Bologna. The two directors, both concerned with matters of censorship, met at the Hollywood headquarters of the Directors Guild and the following is part of their conversation.

Bertolucci: In Italy, there is a very absurd kind of censorship. It is made by judges, priests, and educators, and if you pass the censorship, then a film can play. But a citizen can denounce it and bring it to trial. So the censorship doesn’t mean anything.

Aldrich: One question — now when a film passes in Milan, it is allowed to be shown, then it can be challenged in Rome, right?

Bertolucci: The trial is not in the community where the movie was denounced, but in the community where it was shown first. Our producer tried to find a town in Italy where the judges are more liberal. But he made a mistake: Last Tango was shown first in Bologna, and there was a lot of denunciation. We won the trial but the district attorney appealed the case. We lost the appeal, and we were condemned to two months in prison, including Marlon Brando… The Supreme Court changed the decision of the Appeals Court and now the film is free to be shown. Except that we have to repeat the appeal. In theory, the film is free but is really banned.

Bertolucci: Of course. When there is trouble like that, there will be great publicity. But if they do ban it in that small community, it may be out of circulation for six months. So it is a great risk. They try to open the film in a community where there is a liberal judge.

Action: What was your experience on the Killing of Sister George, Bob?

Aldrich: On Sister George, it was not a political censorship, but a matter of dealing with an industry which had never had a rating system before. No G, no GP, no R, and no X. So they said retroactively, after the fact, that picture that you made is now going to be called an X picture. And there was no appeal to that, except to the public. There was no place to go. You couldn’t go to court, you could only go to the public and ask the public to support you. So that non-political censorship becomes economic leverage. Let us say that you wanted to make a picture as significant as Last Tango in Paris. Then the men of United Artists would say to you, “Fine, you want to make an important picture like Tango? Okay. If you get Marlon Brando, you can get an X, but if you can’t get Brando, we want you to reduce the impact — the social, political and economic controversy – to an R”.

Bertolucci: But fortunately I chose Brando before talking to United Artists.

Aldrich: But I’m using that as an example as to how they would use the rating system without the courts as a condition of the financing.

Bertolucci: So it’s a forma of blackmail.

Bertolucci: May I tell you that this kind of censorship by the distribution company is made not only with sex or eroticism but every kind of creative story.

Aldrich: There is a difference. Take France. The problems of censorship in France with The Battle of Algiers we wouldn’t have in this country. I made a picture called Attack. The Army wouldn’t cooperate, they tried to deny us uniforms and cooperation. But under our present system there is no way of stopping you from making that picture. Whereas in France if you wanted to do The Battle of Algiers, they would keep it out of the country so long that it would lose its impact. So there are different kinds of subtle political censorship.

Bertolucci: I think, finally, that the companies are accomplices of censorship. For instance, I don’t understand why on United Artist motion pictures, there is a trademark that says “An Entertainment from Transamerica Corporation”. I was looking for that trademark on my movie. It wasn’t there. It only said “United Artists”.

Aldrich: Well, there is a theory, that you and I will never be privy to, that you can’t put the name Transamerica on an X-rated picture, because they’re involved in other business.

Bertolucci: But they take the money.

Bertolucci: I’m against every form of censorship. I think everyone should have the right to choose their own show. Adults shouldn’t be tutored; they should be able to see whatever they want to. I believe that censorship always has a political base to it. For instance in Italy, there are a lot of perhaps obscene movies, but they have no problem. But Last Tango was condemned. I think it is because they believe that Last Tango has a greater political impact than any obscene film.

Aldrich: Are you familiar with the variety of opinions in regard to the new obscenity ruling? For instance, this industry is saying. “We’ll find a way to get along with the new law”. This Guild is saying, “No, we don’t want any censorship, whether it’s books or magazines or paintings or films. This Guild is taking an anti-industry position that there should be no censorship: if you want to see a bad picture, that’s your business. It’s not the industry’s business, or a conglomerate’s business. It’s your right as a citizen to see whatever the hell you want to see”. But we are now faced with the Supreme Court ruling which we may have to live with for another few years. Now it deals with obscenity; tomorrow it could deal with politics.

Action: You made some political pictures earlier in your career, Mr. Bertolucci.

Aldrich: Was The Conformist censored?

Bertolucci: No, because while I was talking about the present, I dealt with the 1930’s. They didn’t touch it.

Aldrich: In Italy, do you have a censorship by the Church as well as by law?

Action: In Italy, does the Church condemn films?

Bertolucci: Yes, you in the church and there is a list of films, for adults, and for children.

Action: But do they actually condemn films?

Bertolucci: Yes, but it is not official.

Aldrich: That’s true in this country; the Catholics put out a condemned list.

Action: Didn’t the Catholics actually run the self-censorship in Hollywood?

Aldrich: Yes, the Catholics had a unique position in this industry, starting when Hollywood was Babylon. The industry turned to the Catholics and said, “Help us clean up our industry”. Once they got in, no one could get them out.

Bertolucci: Did you have problems with The Dirty Dozen?

Aldrich: We had problems with violence because there wasn’t an alphabetical rating system. When The Dirty Dozen came out, there was a code that you agreed with or didn’t agree with. They disagreed with some of the violence in the picture. But you see the Catholics did a strange thing. In their thirty years of tenure in running the Breen Office, they substituted permissive violence for sex. So they would say, “Look to violence for excitement, but leave sex and marriage sacrosanct”. So you could be as violent as you wanted for many, many years. It has only been in the last ten years that violence has been a problem. So our history of film has been that if we can’t show people in bed, at least we can show them killing each other. It’s much less human, but, they thought, more practical.

Action: But there are some people who think that violence is more obscene than sex.

Bertolucci: Yes, but I think that’s not true. Because when I was a child I played with guns, and yet when I grew up I never killed anyone. In movies you suppress your aggressive feelings by seeing violence.

Aldrich: You know there are extraordinary studies that say both things: that violence creates violence, or violence vicariously gets rid of violence. Our television in this country is very well aware of violence, and maybe for the good, because we have no control over that time the child goes to bed. Would you say that any country should have a prohibition about the age of a customer in a film?

Bertolucci: I agree only with this kind of censorship. In every country there is an age at which you become an adult. I don’t think Last Tango is a film for a child.

Aldrich: That’s the Guild position. That should be the only kind of censorship. After that certain age, there should be total access. So there is one cop-out for television — there is no control over what age the viewers are. So it’s possible that it’s healthy to have a certain restraint.

Bertolucci: But that should be responsibility of the parents.

Aldrich: But the parents can’t be home if the kid wants to turn the set on.

Bertolucci: In general, I think that censorship is worse than showing something bad to a child, because censorship is always a political oppression.

Interpreter: I think the censorship of films is much more political in Italy than it is in this country.

Action: Does either of you hold any brief for pornography?

Aldrich: Speaking for myself, I don’t know what the definition of pornography is.

Action: Is there a freedom for pornography also?

Aldrich: Even if you found pornography, don’t you agree that any adult has the right to go see it?

Aldrich: I agree. Absolutely. It’s in the viewer. If you are offended or upset, you don’t go. If it’s not going to disturb your neighbor, he has a right to go.

Bertolucci: I am disturbed by the huge buildings and all the concrete on the Italian Riviera, but I was not offended by Deep Throat.

Aldrich: One last question. Is there a remedy that artists and film makers of all countries can bring to a no-censorship impact on their governments? Is that realistic?

Bertolucci: (Long pause). It’s very idealistic. I think we have to fight in each country. This is a particular fight and you can’t separate it from the general fight. The moralists have a point of view, and they don’t realize that they are moralists. I’m not talking merely about censors but many, many anonymous people, who are moralists. There are a lot of people who are moralists. I received an incredible amount of letters with insults.

Bertolucci: I am against all censorship. But I don’t think we can make a kind of United Nations against censorship. The only reason that censorship exists in all countries is repression. But the censorship in every country is different.