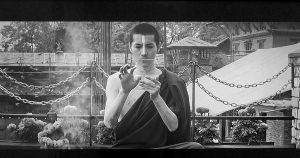 The video Year 2118 and a selection of colour photographs by the artist, filmmaker and Tibetan lama Dzongsar Jamyang Khyentse Rinpoche, also known as Khyentse Norbu, are on display at the Arsenale and the Gardens of the Venice Biennale until November 24th. Set in a Buddhist monastery in the Kathmandu Valley, Year 2118 evokes a future in which modern technology and Tibetan philosophy happily coexist. The photographs were taken in Kathmandu during the shooting of Looking for a Lady with Fangs and a Moustache, Khyentse Norbu’s fifth feature film, currently in post-production.

Khyentse Norbu did part of his apprenticeship in cinema with Bertolucci, working as a consultant on the set of Little Buddha. His commendable feature films include The Cup (1999), Travellers and Magicians (2003), Vara: A Blessing (2013), and Hema Hema: Sing Me a Song While I Wait (2017).