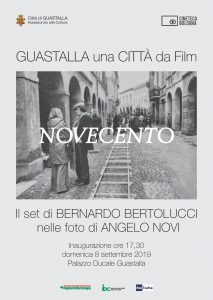 A show of Angelo Novi’s photographs taken on the set of 1900, which was partly shot in Guastalla and its surroundings, opens at 5:30 pm Sunday September 8th at the Ducal Palace of Guastalla (Reggio Emilia). The show, entitled ‘Novecento: Il set di Bernardo Bertolucci nelle foto di Angelo Novi’ also includes a selection of Attilio Bertolucci’s poems commented by his sons Bernardo and Giuseppe, which played an important role in the writing and shooting of the movie, as well as a video of the famous funeral scene shot in Guastalla and the backstage from that same scene taken from Gianni Amelio’s documentary Bertolucci secondo il cinema.

The show, organized by the City of Guastalla in collaboration with Cineteca di Bologna and the Teche Rai (archives of the Italian national public broadcaster RAI), will be open until December 2019.