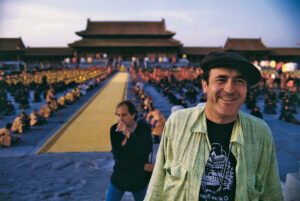 Filmed in Beijing in 1987 and based on the life of Puyi, the last emperor of the last Chinese imperial dynasty, The Last Emperor was the first western film to be made in collaboration with the Chinese government. It was also the first to ever be shot in the Forbidden City, and was the first major western film to be screened in China almost simultaneously with its release in other international markets.