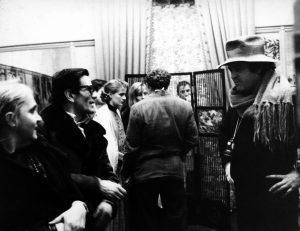 [Ah, what you want to know, young boy,

will end up unasked, lost unsaid.]

There is no way to begin this remembrance without citing these last two lines of the poem A un ragazzo [To a Boy] that Pasolini wrote in 1956-57. The young boy was me, and Pier Paolo’s words today sound like an affectionate, melancholic prophesy. During the time of our friendship the meaning of those verses underwent many changes, on par with the evolution of our relationship, becoming its secret heart, logo, motto. In the fascinating, chancy terrain vague of inexpressibility between two friends of different ages, these two verses were often whispered, yelled, sneered, contended and manipulated according to the changing needs of the understanding between us. To the point of almost reaching that unsettling change of roles between “young boy”, who wants to know but can’t always ask, and “the poet”, who knows but can’t always say.

It all started shortly after my family arrived in Rome in the early Fifties. On a late spring Sunday after lunch, I went to open the door of our house at 45 Via Carini. There was a young man with dark glasses, a roguish tuft of hair, a smart dark suit, white shirt and tie. With a steady and soft voice, he told me he was supposed to meet my father. Something mellifluous about his voice and those clothes that were too nice put me on guard. My father is resting, who are you, my name is Pasolini, I’ll go and see. I closed the door, leaving him outside on the landing. My father was getting up, I told him everything, he says his name is Pasolini but I think he’s a thief, I left him outside. How my father laughed! Pasolini is a wonderful poet, go open the door. Tremendously embarrassed and with my cheeks on fire, I let him in. He looked at me with a kindness that no one could describe. He knew, and I didn’t, that “an executioner’s intention is suggested by the look in his victim’s eyes”, as he would write many years later.

That night I dreamed that hidden inside the young poet was the black-clad cowboy Shane: in the dream Pasolini and Jack Palance joined in a single shining skull. Many years went by before I realized that in that moment, on those stairs, I had conjured and created a myth, blindly handing over the essence of my soul and heart, as only a fourteen-year-old can.

No one can describe what I call my privileged moments. Ever since I knew how to write, I wrote poetry. My father was my first (and only) reader and a generous and implacable critic. When I was about sixteen my poetic production had greatly diminished. “You’re running aground…” my father would taunt me. The truth was that during the summer I had shot my first film, La teleferica, ten minutes in sixteen millimeters, the perfect beginning for a sixteen-year-old director. It was also the first shocking discovery that there was an alternative to poetry, which could be a sticky trap for the son of a poet.

In 1959, the Pasolini family (Pier Paolo, Susanna and Graziella Chiarcossi) moved to 45 Via Carini. We lived on the fifth floor, and they lived on the first. I started writing poetry again and would knock on Pier Paolo’s door so he would read them. As soon as I had written one I would leap down the stairs with paper in hand. He was very quick to read and judge. It never took more than five minutes. Inside of me, I called those occasions “privileged moments”. A stack of poems came from them, which Pier Paolo encouraged me to publish three years later. Who knows what my father thought, demoted without explanation to reader number two.

In the spring of 1961, I ran into Pasolini at the front door and he announced that he was going to direct a film. You always tell me you like movies, you’ll be my assistant director. I’ve never made a film either, he ended abruptly.

The film was Accattone, and the privileged moments intensified, overlapped and wrapped around me, giving me a sense of vertigo. They started at seven thirty in the morning in the garage by our house. Still sleepy, I would wait for him. Punctual in being slightly late, a shadow would move among the cars. It was Pier Paolo, with his painful and mild smile. We would take off in a Giulietta toward Torpignattara, the Mandrione, the working-class neighborhood Gordiani, on the other side of the world.

We would talk. Sometimes almost immediately or after a couple of minutes, other times we would get to the set without out opening our mouths, like in therapy. And just like therapy, I thought his words would reveal secrets no one would ever have known. He often told me about dreams he had the night before, and I was surprised that, behind the screens protecting him, the recurring theme was a fear of castration. I naively encouraged him to use the dream contents in the scene that we were shooting that morning, so that these nocturnal remnants would be scattered throughout the film just as daytime remnants are scattered in dreams.

I noticed that the arches of bridges, of Roman aqueducts, of tunnels, enclosing nomad caravans, every arch we encountered on the road inevitably made him sigh. Those sighs sparked my curiosity about his homosexuality and the homosexual world in general. He spoke to me happily but also somewhat cautiously. My twenty years of shameless ignorance were a challenge and a threat, two things that made him cheerful and alive. That is how I got to know about the banks of the Tagliamento, his friends in the mild sun of Friuli, packs of blithe kids roaming from town to town, Venetian phonemes, his eternally young mother Susanna… a natural, exquisite, almost pious world that exuded from the poems I had read and re-read and came back to them like a ravaging wind of too much joy. Privileged moments. The Giulietta smelled like cigarette butts even though I never saw Pier Paolo smoke. We would stop at a bar in Pigneto and be immediately surrounded by the crew but also mostly his friends, who called him “a Pa'”. 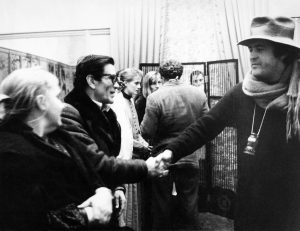 use the fifty, don’t worry

about the light bursting through – we’re doing

this tracking shot against nature!]

Accattone was an intoxicating and dramatic experience. I expected anything to happen on my first day on a real set of a real film, but not witnessing the birth of cinema. Pasolini came from the world of literature, poetry, criticism, philology and art history. His involvement with cinema had mostly been as a writer: he had written a few good screenplays, but it was a sporadic and fluctuating relationship. He said he loved Chaplin and Dreyer’s The Passion of Joan of Arc, which he saw at the first post-war film clubs, and I even once caught sight of tears in his eyes at the end of Mizoguchi’s Sansho the Bailiff (Sanshō Dayū). At that point, he would go to the cinema, especially on Sundays in the outskirts, so he could pay for his friends’ tickets. I watched Pier Paolo transform himself, from the very first day: he became Griffith, Dovzhenko, the Lumières… His point of reference was not cinema, which he didn’t know much about, but, as he himself often said, the Sienese School and altarpieces. He would fix the camera in front of faces, bodies, shacks, stray dogs in the light of a sun that seemed sick to me but reminded him of those gold backgrounds: each shot was frontal and ended up becoming a small tabernacle of underclass glory. And yet, day after day, shooting his first film, Pasolini found himself inventing cinema with the fury and spontaneity of a person who experiments with a new means of expression and cannot but master it entirely, erase its history, give it a new beginning, drink its essence like in a ritual. I was his witness.

One of my jobs was to check that the actors had learned their lines by heart. Almost all the actors were pimps, papponi in Romanesco, and I quickly became their confidant. A few, strangely the ones who seemed to me to have a softer heart, controlled up to three or four prostitutes. Their nights were restless, and they ended up confessing to me the anxiety that seized them at dawn: if the girls come home tired and the pasta sauce isn’t ready and hot they’ll go and report me tomorrow for exploitation. Sympathetic to their ordeal, I let them secretly leave the set at night without anyone noticing. Except for Pier Paolo, who saw everything and approved of my compassion.

Day by day Pier Paolo’s discovery of film continued. One morning he said he wanted to do a tracking shot. My heart was beating faster than usual while the grips dropped some tracks on the dirt road, causing small clouds of dust to rise up. The tracking shot was supposed to precede Accattone walking towards a shack, framing him in a close up at a constant distance. That for me became the first tracking shot of film history.

Beyond the camera dolly, the open space beyond Accattone’s shoulders, on the uneven and scruffy meadows beyond the shacks of South Rome, beyond Matera, south of the South, towards Ouarzazate, Sana’a, Bhaktapur, once Pasolini invented cinema, he continued to invent his own film history. As he moved along this path, he gradually became that enigmatic dark cowboy of Shane. His metamorphosis was without pause. He experienced all of cinema. He transitioned from the sacred frontal composition of his primitive style to the desolate and cultured mannerism of his own language to the atrocious and sublime visions of Salò.

In the fifteen years that flew between Accattone to the night of November 2, 1975, Pier Paolo invented himself as a director. All this was possible only because he was much more than a director, the man who asked Tonino Delli Colli for the first miraculous “tracking shot against nature”.