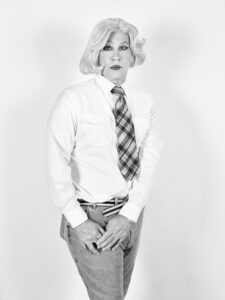 The exhibition Malkovich, Malkovich, Malkovich Homage to Photographic Masters was born from the collaboration between the American photographer Sandro Miller and John Malkovich. On display are 61 works from the famous and celebrated series in which Malkovich interprets some of the most iconic shots in the history of photography. The photos pay homage to thirty-four masters of photography, such as Albert Watson, Annie Leibovitz, Bill Brandt, Diane Arbus, Herb Ritts, Irving Penn, Pierre et Gilles, Richard Avedon, and Robert Mapplethorpe, with John Malkovich, a friend and accomplice of Miller, who from time to time he interprets the subject of famous shots, transforming himself into Marilyn Monroe, Salvador Dalí, Mick Jagger, Muhammad Alì, Meryl Streep, John Lennon and Yoko Ono, Andy Warhol, Albert Einstein, Ernest Hemingway, and others.

The collaboration between Sandro Miller and John Malkovich dates back to the nineties, when the two met in Chicago at the headquarters of the Steppenwolf Theater Company of which Malkovich was one of the founders. “He became my canvas, my muse, John would sit down and listen to my idea, then he would say ‘Ok let’s do it’”, says Miller. The shot that gives life to the entire project, which began in 2013, is the one in which John Malkovich plays the writer Truman Capote portrayed by Irving Penn, one of the masters who most influenced Miller’s career.

Following this, the leading actor of Bertolucci’s The Sheltering Sky, who has remained a close friend of the director over the years, interpreted a gallery of portraits so well-known that they have almost become devotional images. Here he is in the part of Korda’s Che Guevara, in Warhol’s famous self-portrait, or in Mick Jagger in Bailey’s portrait. The shots are preceded by a meticulous research in which Miller and Malkovich, assisted by costume designers, make-up artists and set designers, carefully analyze every detail of the originals, probing the works of the great photographers taken as models, present in the exhibition in the form of reproductions that accompany the photos of Miller.