On the occasion of “C’era una volta Sergio Leone”, a large exhibit opening on December 12th at the Ara Pacis Museum in Rome (through May 3rd, 2020), we’re publishing this article in which Bertolucci related his first encounter and subsequent collaboration with Sergio Leone as one of the co-writers for Once Upon a Time in the West.

Once Upon A Time In Italy

It was 1967. I was very frustrated. After my first two movies, The Grim Reaper and Before the Revolution, I’ve been inactive for three or four years. I felt Italian cinema was entering a kind of degrading phase: the values of neo-realism had been transformed into commedia all’italiana, Italian-style comedy.

It was as if neo-realism had lost its great urge and direct line to life. It was just a description of Italy during what was called, in the early Sixties, the economic boom. It felt like cinema of the petite bourgeoisie with values I couldn’t share. I felt estranged, like a foreigner in my own country.

So I waited anxiously for every new Sergio Leone movie. He was the only one, apart from the four big maestri — Rossellini, Antonioni, Visconti, De Sica — doing something different. I went to the afternoon opening of The Good, the Band and the Ugly. The day after, he called me: “This is Sergio. I would like to meet you”. And so I went to see him.

“You were at the first show of The Good, the Bad and the Ugly“, he said. “Why do you like my movies?” And I said, “I like the way you shoot the horses’ asses. Directors always shoot the horses in profile, where you have this wonderful line. Very few directors shoot the back, which is less rhetorical and romantic. One is John Ford. The other is you”. He was very happy, and said, “Okay, you should write my next movie”. And so [Italian horror film director] Dario Argento, who was then a movie critic, and I went to Leone’s house where he told us the beginning of a story, a very crude idea that later became Once Upon a Time in the West.

Leone told stories, pieces of stories, with the passion of a storyteller who is also a child. He looked at the American western with the purity of a child, that same quality of dreaming. Dario and I started to write, and Leone would intervene. We worked for three or four months and wrote a treatment of three and four hundred pages — very, very long. But then I left to film an episode with The Living Theater, and I let someone else take over the screenplay.

Many things remained from my treatment in Once Upon a Time in the West: the beginning and the family massacre. There was no dialogue. I wrote it thinking about The Searchers. I thought it would be great if Sergio shot this quotation. When I saw the movie, there quotations had been done without being perverted by a cinephile’s knowledge — reinenting the same thing — an innocent quotation. Then I teased him and he became furious, saying, “I knew it was!” “No”, I said, “You didn’t”. Very nice, very funny.

For many years Sergio was unique in Italian cinema. Maybe I should say the European cinema. Maybe I should say cinema. He was a mixture of incredible sophistication and… vulgarity is the wrong word. He grabbed directly from life. Sometimes his movies looked like Visconti — he had a very pop elegance. Sometimes he looked for the prosaic but vulgar moments of the characters. Like only the primitives of cinema, Sergio believed completely in the story he was telling. Like the audience believed.

And yet the western was in agony in America, more or less dead. And if it revived, in some way it’s thanks to Sergio Leone. Sergio took the American western and he gave something back to Hollywood. The new westerns owe everything to Sergio.

If you ask why, it’s because just in the look between the two of Sergio’s characters you feel the tension and weight of an epic. His movies are good directly at the surface level. There are other layers but I think Sergio was stronger as a pure talent of mise en scène — the relationship between the camera, the bodies of the people in front of it, and the landscape — than a philosopher.

After he finished Once Upon a Time in America he said, “They cut the memory of my film”. He was talking a bit like a supercritic, almost a philosopher of the cinema. That was the weaker part of him.

He was generous with ideas about the camera and emotions and his extraordinary tricks. That’s why I went to see The Good, the Bad and the Ugly on the first day at 3 pm. And that’s why I had to work with him. 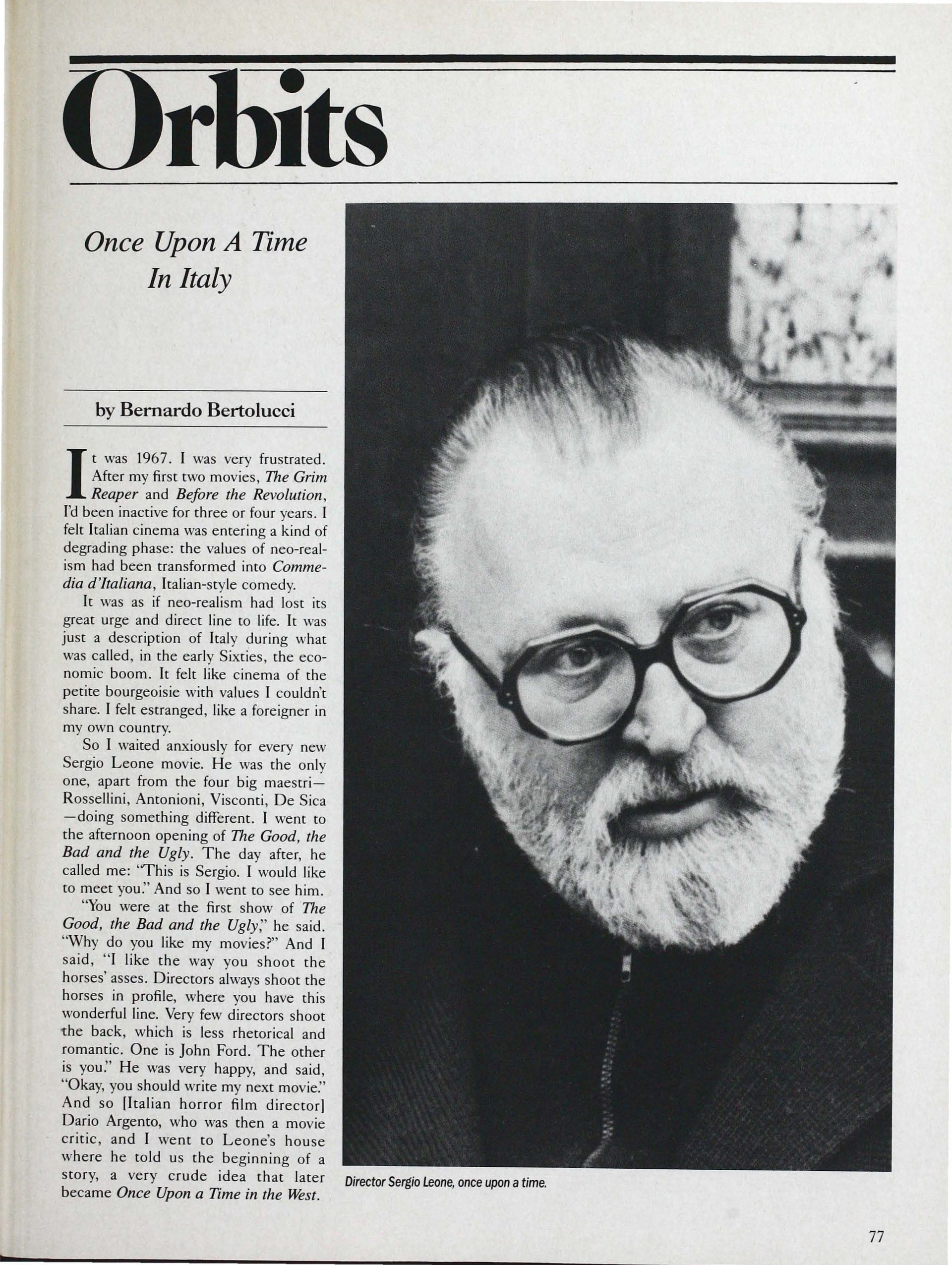 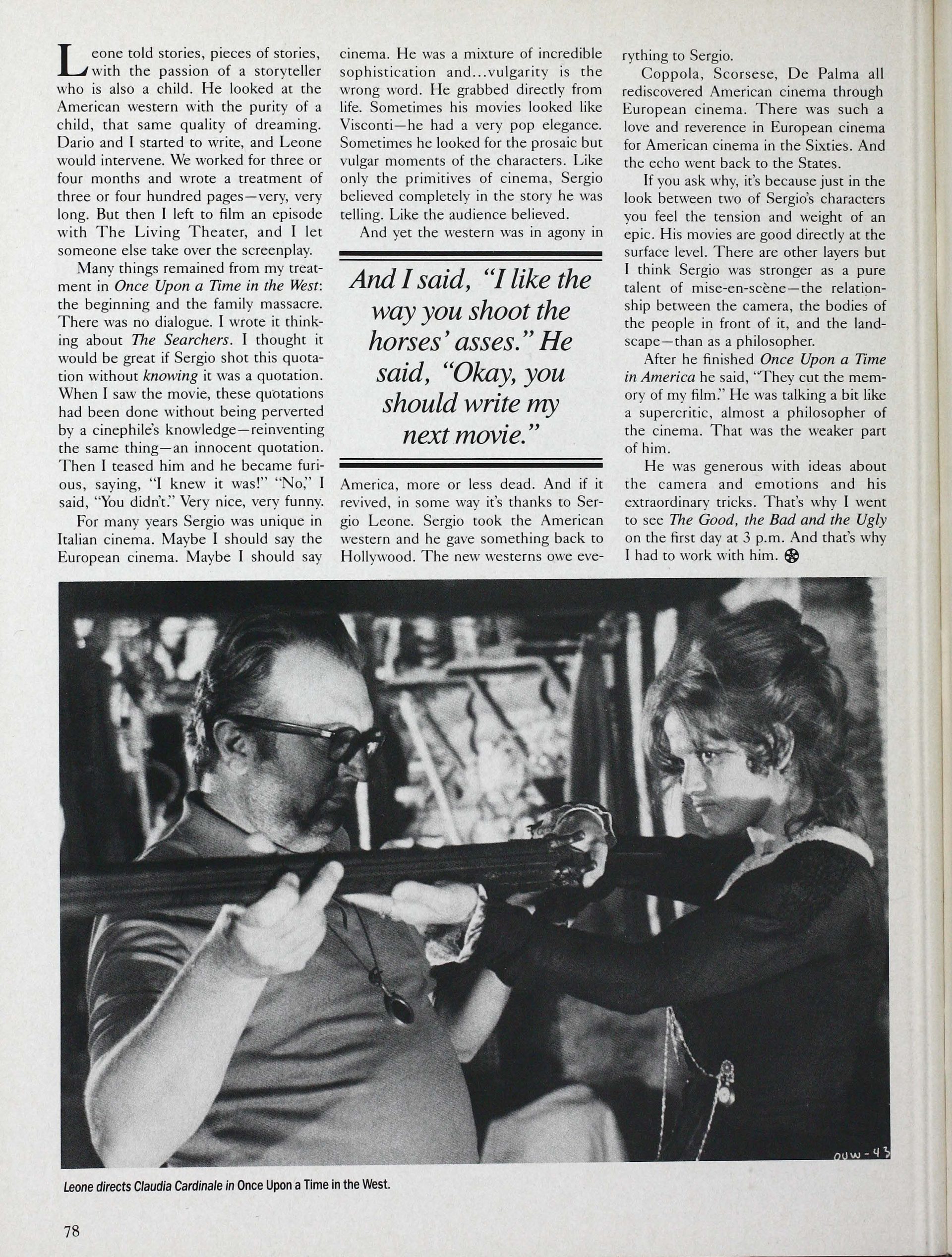 search
keyboard_arrow_left
Back to Archive Diary