In October 1977, in a Japanese restaurant in Manhattan, Andy Warhol and Bernardo Bertolucci met to talk about 1900, the White House, the Watergate affair and the London punks. The following December, the conversation was published on the magazine Interview. Below you will find the full interview, found among the microfiles of the New York Public Library for the Performing Arts and published in Italy in the volume of interviews with Bertolucci Cinema la prima volta.

The interview is accompanied by the teaser of a documentary never made in which Bertolucci tells of his missed meeting with Bob Dylan, in that same New York where he met Andy Warhol. 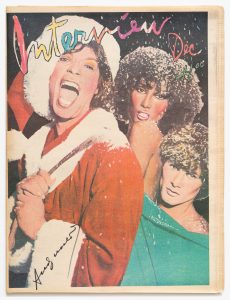 BERNARDO BERTOLUCCI: You liked it?

AW: I loved it. It’s the best movie I’ve ever seen.

AW: I sat next to Jack Kroll from Newsweek at the screening. He loved it.

BERNARDO: When have you been? At the Lincoln Center?

AW: No, at the Cinema Studio screening.

AW: Great. I think I’m going to see it again in Washington. I felt in love with Gerard Depardieu. I think he’s so great.

AW: No, I just like him. I met him at the Deauville Film Festival. He’s really nice. He’s thinner now than he was in your movie.

AW: And Domenique Sanda is so beautiful. She’s the most beautiful girl in the world.

BERNARDO: That’s what Canby hates. He said she was just like Catherine Deneuve in the commercial for French perfume.

AW: Marina’s going to order for everyone.

MARINA: It’s disgusting! I tried it once.

AW: That one’s got a lot of iodine in it. It’s very bad for pimple, but I love it, anyway.

BERNARDO: Andy, what about meeting President Carter and having a nice time with him and show him the film?

BOB COLACELLO: You want to go to the White House?

BERNARDO: Ah, yes, I’m dying to! You visited Ford, no?

BOB: I’m a Republican and Andy’s a Democrat.

AW: Robin used to be with the Pentagon.

BERNARDO: I met a bodyguard in Rome. He was a bodyguard with Liza Minnelli. He was sent from Las Vegas by Frank Sinatra, like a present. He told me he used to be bodyguard with Kennedy, Marilyn – all the people that are dead.

AW: It was on television. Wasn’t it sad? He’ll be on the front page.

ROBIN: Wasn’t there a song about him – “And Bing-o was his name” or something?

AW: But Joan Crawford was bigger than Bing Crosby and they put her on the second page. Oh, I wanted “1900” to be longer so I could have stayed there all day. Could I see all the stuff you cut out one day?

BERNARDO: They cut out everything, not me. It was nice – the first version. It was a polyglot. Everybody was speaking his own language – French, English, Italian dialects, German.

AW: The dubbing wasn’t bad at all.

BERNARDO: He’s now in the cemetery.

MARINA: He drove me crazy, just between you and me.

BOB: Who was he playing golf with? Nixon?

ROBIN: No, he wasn’t in Palm Springs.

BERNARDO: How much room do you need to keep all the tapes?

AW: I don’t know. When Watergate happened I didn’t know whether Nixon copied me or whether I copied Nixon. I had to stop taping for a while.

BERNARDO: Yes, but at least it’s shown. It’s not secret.

BARBARA ALLEN: When you take such good care of yourself and then you die, it’s so sad.

CATHERINE: Nowadays I’m more often than not bored by movies. And not for one second was I bored in “1900”.

CATHERINE: Do you go to films at all?

BERNARDO: I used to go four times, five times a day. I can’t do it anymore.

CATHERINE: Because you’re working so hard?

BERNARDO: No, because there is no movies.

MARINA: Are you still a Republican?

ROBIN: I’ll always be a Republican.

MARINA: Have you changed your mind since then?

ROBIN: Why should I change my mind?

ROBIN. Fascist? When Italians slip into…

BOB: I hope it was an italian slip.

CATHERINE: Are you talking about “Italian fashions” or “Italian Fascists”?

MARINA: I will never talk about anything about this country, darling. I’m a guest of it. But you know what I’m trying to say.

BERNARDO: He’s right. It’s too simple to say Republicans are Fascists. You are much more complicated than that.

MARINA: No, I really don’t mean it to be mean.

ROBIN: I didn’t take it that way.

MARINA: But it happens very often that people change their mind. We agree on that point.

CATHERINE: Should I have a saki on top of my Bloody Mary?

BOB: Marina went all the way to Italy to vote Communist. Don’t you remember last year? She made a special trip.

MARINA: That’s bullshit. My vote is always a sacred secret.

MARINA: The problem is…

MARINA: In any case, Robin, I am in total agreement on the sushi – I mean the sashimi.

CATHERINE: Is that your tuna?

CATHERINE: And I’ve lost my chopsticks so I’ll have to use my hands.

BERNARDO: What is that she’s eating?

BERNARDO. She ate all of it – fantastico!

BOB: Bernardo, I’m dying to see your movie, I hear it’s so beautiful.

BERNARDO: You have to see with an audience. Is much better.

BOB: We should go together to Washington.

BERNARDO: I’ve been in Washington but just at the airport. I went on the Concorde from Paris to Washington. It was very quick. There was no movie and the aircraft is so thin. Everything is – how you say? Aerodynamics? Long and thin. And you pay 27% more than First Class.

AW: Is the food better?

BERNARDO: No food at all. You leave at six o’clock in Paris and two hours later they give you something and say, “The Concorde is so beautiful, so great that you can leave Paris in the afternoon and have dinner in Washington so we just give you a snack”.

BARBARA: Do you want some more seaweed?

BERNARDO: I was in London a week ago.

CATHERINE: Do you see any punks?

BERNARDO: I saw once a punk in Roma. I was looking in King’s Road. I couldn’t find one.

CATHERINE: Maybe they only come out on Saturdays. They were probably all at school.

BERNARDO: No, I was there on Saturday looking for punks – no punks. Have you seen punks?

AW: “Living”. It just opened. They had a lot of screenings. You’d like it.

BERNARDO: I saw a movie in an incredible screening room. It was the Brut Fabergé screening room. Do you know it? It’s incredible. I wanted to pee. It’s very strange. If you want to pee, there is an egg and the doors open and you get inside and there is a bathroom and the egg then closes and you don’t know how to get out.

AW: It’s great. I think it was designed about six years ago.

AW: I haven’t heard of it. Where is it playing?

BERNARDO: I don’t know anything about it. The bathroom was nicer than the movie. But it was…

BOB: What part of Brooklyn?

BOB: And this was all looking for locations?

BERNARDO: Yes, I come back to shoot in March or April.

CATHERINE: What is this?

AW: What’s your new movie about?

AW: But what’s it about?

MARINA: Andy, have a little rice cake. And a little soya, too.

AW: What she said. I heard it.

MARINA: I liked both of them but it has nothing to do with sizes.

BOB: You mean Catherine slept with both of them?

AW: No, they’re naked in the movie.

ROBIN: Did anybody here see “Salò”? What was that rating.

BERNARDO. Yesterday the head of the most important major company of the moment told me about my next movie. He said, “If you have an X we can’t advertise on 75 most important newspapers”.

BERNARDO: But I think it’s very important to have the frontal male nudity!

CATHERINE: I quite agree.

AW: “Equus” has more than yours.

BERNARDO. Oh, yes? And it’s not an X? Is more arty maybe.

CATHERINE: I was wondering something – when people make love in films, do they ever get excited?

BERNARDO: Do they ever get…?

BARBARA: Is she still drinking that Bloody Mary?

AW: Let’s have a Pina Colada.

MARINA: Guinness, you’re not under control.

CATHERINE: No, Marina, I was wondering about actors making love – but they’re not really, they’re acting making love – whether they get sexually stimulated.

AW: In the movie, Gerard’s looked bigger than Bobby’s (De Niro). Was Gerard more excited or…?

MARINA: No, it was smaller. I saw it very well.

AW: I saw it better than you did. Let’s have a fight about it.

BERNARDO: In the movie it was bigger because…

Who's Ever Met Bob

Who Ever’s Met Bob is a teaser for a documentary on Bob Dylan without Bob Dylan, from an idea of Giovanni Mastrangelo, directed by Monica Stambrini with the collaboration of Tiziana Lo Porto and Ettore Caretta, and with Bernardo Bertolucci, David Gilmour, Nick Laird-Clowes, Phil May and Joe Boyd. 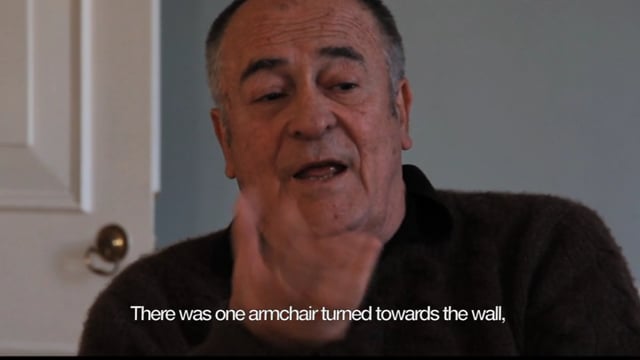