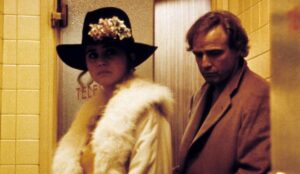 “Having already broken my self-imposed rule about not writing about the New York film festival (of which I am director) in discussing the new Buñuel, I might as well break it again to report on our world premiere of the new Bertolucci film: Last Tango in Paris.

It was something of an event. Pauline Kael, a lady who does not often lose her cool, wrote in the New Yorker «Last Tango in Paris was presented for the first time on the closing night of the New York film festival… that should become a landmark in movie history comparable to 29 May 1913 – the night Sacre du Printemps was first performed – in music history. There was no riot, and no one threw anything at the screen,» conceded Miss Kael, «but I think it’s fair to say that the audience was in a state of shock, because the film has the same kind of hypnotic excitement as the Sacre, the same primitive force and the same thrusting, jabbing eroticism. The movie breakthrough has finally come.»

By which she means that at last a director has come along and used the ‘new permissiveness’ to make a film about sexuality which is both intelligent and moving”.